Dr Jeff Foster is a Men’s Health specialist and one of the founders of H3Health.  He is passionate about spreading awareness of men’s health topics, whether by lecturing, writing articles, creating videos and infographics, and of course, seeing patients within the NHS and at his private practice.

Before studying medicine, Dr Foster completed an honours degree in Physiology at King’s College London. He then went on to study medicine at Warwick Medical School, and has lived and worked in the West Midlands since graduating in 2004.  Since 2012, Dr Foster has worked as a GP Partner at a busy practice in Leamington Spa. 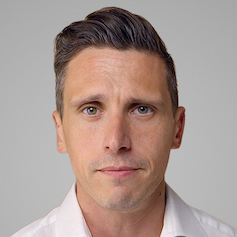 Before studying medicine, Dr Foster completed an honours degree in Physiology at Kings College London. He went on to study medicine at Warwick Medical School, and has lived and worked in the West Midlands since graduating in 2004. Since 2012 Dr Foster has worked as a GP Partner at a busy practice in Leamington Spa.
In addition to his core general practice work, Dr Foster has also gained a Diploma in Obstetrics and Gynaecology and, until September 2017, worked as a Staff Grade doctor in the Accident and Emergency Department at University Hospitals Coventry and Warwickshire, accumulating over nine years of accident and emergency experience.  Dr Foster is proficient in all aspects of general practice including paediatrics, mental health, general medicine, and surgery.

In addition to his core GP work, Dr Foster has been involved in developing and promoting Men’s Health in Warwickshire and nationally. He now runs the leading men’s health clinic in the West Midlands, which addresses all aspects of men’s health including:

Low testosterone: Why is more important than How

Dr Jeff Foster, Men's Health Specialist, gives a reminder on why testosterone is so important to men's health and what your options are if you think you may be suffering from low testosterone.

With the recent heatwave, Dr Jeff Foster provides advice on some easy new habits to give better health and wellbeing.

Tongue pain can point to anything from stress and nutrient deficiency to diabetes and even oral cancer. Find out what your pain could mean and how to treat it.